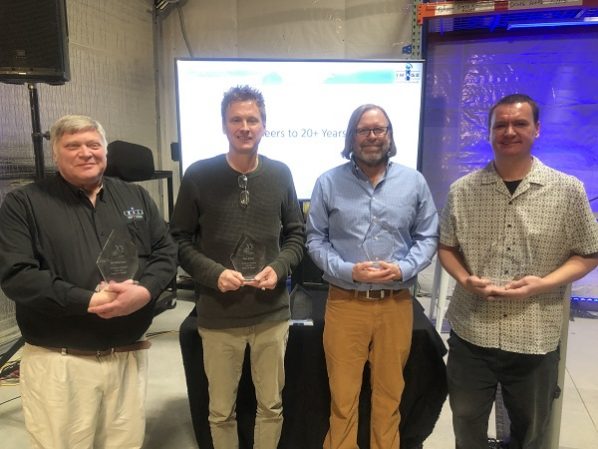 This year’s Image Audiovisuals annual Town Hall meeting had a special ending, as Dave and Diana Mueller honored five employees who have been with ImageAV for twenty years.

“It was a privilege to recognize these guys for over two decades of dedication and hard work for our company,” says Dave, President and Founder, “they’ve helped shape our culture and company and have really become family.”

Ron Oakley started with ImageAV in 1990 when “the office was just two rooms in the basement of the long-gone Writer’s Manor Hotel,” he recalls. As employee number two in the company’s history, he worked closely with Dave as they grew Image over the startup phase of the company. “When Ron received a new piece of inventory that he wasn’t familiar with, he’d take it completely apart and then put it back together, so he understood everything about it” said Dave.

“And we had one van,” Ron added, “a 1979 Chevy passenger van with all the seats removed.” Ron spent years travelling around the country for Image providing live event production services for Pharmaceutical clients. He designed pre-engineered racks of equipment that greatly cut set-up and strike times.

Over the years he has held positions as a technician, Rental Manager, Warehouse Manager, and Facilities Manager, where he sits today. “It’s almost impossible to describe how computer technology has changed our industry. Our stage lights now have more processing power built in than our first desktop computers possessed. The things that we can do for clients now, on some of our simplest shows, were literally unthinkable when I first started,” he says.

Piling The Gear Inside the Door

Billy Wells saw an ad from ImageAV in the newspaper. He remembers interviewing with Dave and Ron and was offered a job as an audio visual technician in 1997. In their new office off Yale Avenue in south Denver, “I remember doing events and loading back into that small shop and basically just piling the gear up inside the door leaving barely a path,” he says, a stark contrast to today’s 15,000 square feet of warehouse space with millions in inventory.

Billy has fond memories of the early days when the company was small enough to host the annual Christmas party at the office and a Summer party at the Mueller’s home. He is currently the Director of Sales for the Mountain division overseeing properties in Breckenridge and Copper Mountain. Billy was previously a Rental Manager after his time as a technician.

The Change From Analog to Digital

Dave Kreutz joined ImageAV in 1999. “My first impression was that I really liked the people and the way employees were treated. I still do. I love the people I work with and for,” Dave says. One of the biggest changes he witnessed over the years was the “change from analog to digital. New equipment and technologies are created almost daily.”

As one of ImageAV’s top Project Managers, Dave enjoys getting a chance to work on the road and traveling to new cities. “Dave and I traveled and produced many shows together from coast-to-coast,” says Dave Mueller. “We both worked all of the events that introduced the Birth Control Patch to the US in 2002. After 10 events, our heads were so full of facts and information, we would both get inundated with questions from women we knew that were curious about this new product!”

Over the years Dave has become a trusted resource for some of ImageAV’s top clients and spent 2019 traveling everywhere from Seattle to South Carolina to Maine for their events. Before his time as a Project Manager, he was the Director of Event Technology at the Colorado Convention Center, an Audio Engineer and technician.

We’re There to Address Any Challenge

Completing the trio of Dave’s, Dave “Mac” McGuire also started in 1999. As a Senior Project Manager, Mac is responsible for the design, engineering and logistics for some of our largest events. “We want to establish a comfort level and a familiarity with our clients. We get to know them as individuals and as teams, and we get to know their cultures and their unique needs. It means letting them know that we’re there for them to address any challenge and implement solutions to ensure their event is a success.”

“Mac is a very genuine person who is determined to exceed any and all expectations. Our clients that Mac has taken care of over many years are like family to him, as he is to them,” Diana Mueller, CEO, notes. Mac has held numerous roles as ImageAV, previously the Video Production Manager and Video Technician.

Bill Wenzinger became a part of the ImageAV family in early 2000. “We were a small company that serviced mostly Hotel Contracts, with an occasional out of town show. In those days a large show would fit in the old small box truck, or a large van,” he remembers. As the company grew, so did the productions, and Bill drove trucks to the national shows. “I enjoyed the road time. It was a great opportunity to see the country,” he continues, “I was doing so many road trips that I had my favorite hotels and restaurants; I even had a favorite hair stylist in Paris, Indiana!”

Bill is currently the Lighting Technician after holding roles as the Rental Manager, Warehouse Manager, and technician. “Bill has been a Swiss Army knife of skills for us,” adds Dave Mueller, “any need we’ve had over the years, Bill has stepped up and filled that need.”

“We have been very fortunate to have this great team in place for so long. They continue to be an integral and important cornerstone of ImageAV’s foundation,” says Diana.

Contact us today and let us know how we can help you.